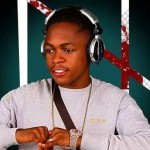 The new song, “Black,” is taken from his recently released extended play project, “Nothing To Prove.”

Victor AD, who started his music career in 2014, released his first hit single “Jowo,” which went on to become a chart-topping tune. Victor AD’s single “Wetin We Gain” was released in 2018, gaining him, even more, exposure and popularity.